What is Options Sizzle Index in ThinkorSwim? How to Use It

Here are two screenshots stitched together to show the option based sizzle indexes for a watchlist. 10/22/19

Please note that the “stock sizzle” which is not shown here, and only available on desktop, is adjustable by number of days. 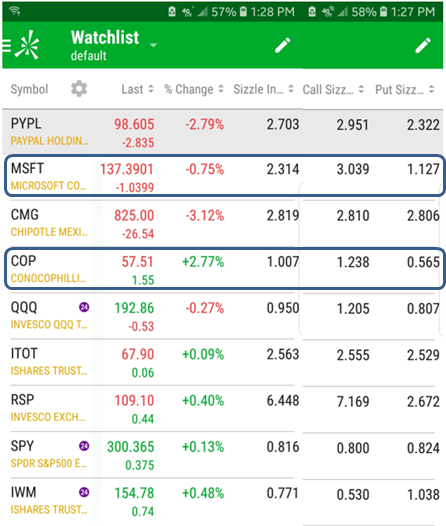 The option sizzle indexes are set to show, in percentage terms, what the volume in the options market are trading vs their 5 day moving average.
(The 5 days are not changeable.)

Let’s take Microsoft as an example. At the time of this screenshot, Microsoft traded 2.314 times more option volume than it had the previous 5 days. What that 5 day amount was is all relative.

It is important to remember that these are just clues as to what is going on in the option market. We do know that MSFT options were trading in higher volume than they were in the previous 5 days. We also know that there was much more activity in Call Options than there was in Put Options.

Why? We don’t know. If we did, we’d be Gazillionaires!
We also don’t know from these indexes whether it was buying or selling of these option contracts. Again, refer to the previous sentence.

If the stock is up a large percentage, it makes sense to me that Call option volume would be higher as well. Whether BOT or SOLD, I would tend to look into the option chain and see if there is something to act on. What, exactly, is up to you!
Last edited by a moderator: Oct 23, 2019

To tag along with Sizzle we have zero idea if there are spreads on of any kind either. All you have is an idea of interest v 5 days. Most large option moves do not have alternate straddles or spreads. If somebody —- especially big dinero —- knows something they aren’t wasting money on the other side of a position. Plus allot of large buys are camouflaged ... buys are spread out. I’ve used options as a proxy for owning individual equity shares based off a well known pattern like C&H or MeasuredMove backed by a Sizzle scan and studies with decent results. All the best.
S

I been using sizzle and tracking it for quite a long time. I use it to tell me if there is interest in the stock - kinda like relative volume. basically "stocks in play". Most of my intraday scanners filter for szl >2. It is easy and simple to add. However sizzle by itself will tell you nothing else about the direction of move or whether it will happen at all. Just a good way to filter out stocks which very likely to do absolutely nothing.

However I must point out there are some stocks (XLU, XLRE ones ) which can make nice intraday trends without any increasing in szl (and volume).
Large caps have lower sizzle on average. Most high fliers with szl >4 are ones with catalyst. Something like 50+ is usualy midcap with strong catalyst. Also sizzle tends to fluctuate during the day ( with options flow) but there is no way to parse or graph this information (TOS does not expose it)

For your 2 columns, what's the difference between Stock Sizzle and Sizzle Index. I was reading the TOS learning center so I have an idea about "sizzle index". thanks so much

Ok then, if sizzle is just puts vs calls...has anyone seen a good TOS script for relative-volume for the first hour of the day? I mean...comparing the first hour with the last twenty FIRST HOUR OF THE DAY. The first hour is almost always above average, so that doesn't count. It must be compared to previous "first hours". Not the last 20 hours of trading. The script must be here somewhere.

so, i was navigating TOS and i noticed the following: the sizzle index. for those who aren't familiar with it , it shows the daily total calls/puts versus the average of the last five days calls/puts. so if the sizzle index is over 1 it means that there are more contracts today comparing to the average of the last five days. furthermore, you can break it down to calls sizzle index and put sizzle index to see exactly which contracts are being bought on a specific day and how sizzling they are. my question is: based on your experience and trading, how much impact does these indices have on the price action and could they be reliable in choosing the direction of the stock price?
also, is it possible to incorporate these indices with technical analysis to predict price direction?
please feel free to express ur views. thx

VIP
Very well said, @skynetgen the stock sizzle is also customizable, which allows me to set it differently for different scans

VIP
Hi @cherif Please fill out your signature. What type of investor are you and for how long have you been doing it? 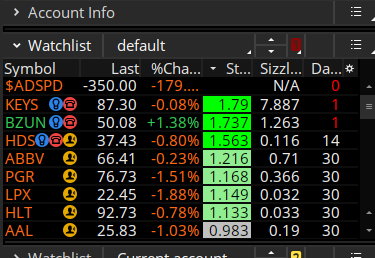 Here is an example of my Watchlist. Stock Sizzle, Sizzle Index, and Days till Earnings are the last 3. They are all built in. Stock Sizzle can be customized.

The first part of your question is backwards; the sizzle indexes do not impact price action, they show what current action is compared to, say, 5 days ave, in the case of Sizzle Index. Same with the Put or Call Sizzle Index.
The rub is that you only have volume for the options, not whether they were being bought or sold. IMO, they have little to do with price direction.
We have 2 things to hang our hat on; Price and Volume and they are used to make most indicators. They cannot be used to predict price direction.
All we have are possibilities and probabilities. That comes from study and observation.

Thank you for your reply. So the question that remains unanswered is what is the purpose of having a sizzle index on one’s watchlist?
Now, if the sizzling index cannot predict future movements, how come major trading institutions keep an eye on $PCALL to initiate reversals??
Also, when $TRIN touches extremes, it signals reversals and indicates OB/OS levels of the market.
My thesis is why we all strive to make tech analysis relevant on intraday and daily trading, big liquidity uses internals to make moves on the market while the individual trader is left out.

I'm looking for a script where i can add Calls & puts volume into the watch list columns. Anyone having it?

They have a heap of info on the stats of options. Also watch the Theotrade videos on #1 How to user Tos and #2 the analyze tab

VIP
hi @subharmonic yes i see them in that section, i want this to be part of my watch list column, do you see any custom script for that?

@raghavag2004 Sorry , that I do not, nor did I see a fast way to do it from poking around. They do have the put sizzle index, call sizzle index, and put/call ratio built into the watchlist. Not ideal but should give you an idea where the money is going.

Currently it can be scanned for but this doesn't allow you to visualize historical values of sizzle and the connection it had to price as you would on a chart. Does anyone have any lower study that gives a single line of data that represents the sizzle. This can be all option sizzle or individual call/put. I think it would complement the strategy I'm working on nicely.
N

Hi Guys !!!
I see some of you using the stock sizzle in TOS.
But I cant find it in TOS , I see only the stock index.

It was removed or something ?

Staff
VIP
Lifetime
@nervo88 You can find it under your watchlist column.
N

BenTen said:
@nervo88 You can find it under your watchlist column.
Click to expand...

but this is all what i get for sizzle. no Stock Sizzle 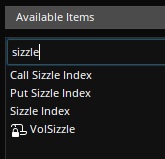 Staff
VIP
Lifetime
@nervo88 What is exactly is the "stock sizzle" that you're looking for?

According to ThinkorSwim, the Sizzle Index "allows you to find stock symbols that currently see an increase in the number of options traded compared to the last five days’ average."

You can learn more about it here.
S

did you figure this out? I'm also looking to implement something like this.
You must log in or register to reply here.