Volume Expressed as a rate of speed

Theory:
In my view, the market is a race to both up and downsides, sometimes we lose momentum and race in a sloppy direction. While the majority of the market moves together en masse with help of HFT, algorithmic trading, and reactionary events cause by human behavior there are some oddities that I suspect tend to deviate from the market moves. Mainly what I am looking for are stocks that deviate from the majority that already hold parameters that may qualify as a "short squeeze candidate". Generally shorting, naked shorting, and a variety of other usefully employed strategies by institutions including hedge funds attempt to manipulate the price of a stock prevent a breakout. My observations thus far tend to display that the squeeze to the upside is 100% inevitable, it's a matter of slowly covering short position while keeping the price pinned to take profit prior to the squeeze. Among other details I am uneducated about, quite honestly (hey, I'm learning). The purpose here is to find what has been deviating from larger market moves, and then track and examine for a sudden increase in volume fluctuation. Really this biggest difference here is observing volume rather than price.

Say for example, market grinds higher while ABC trades flat. There hasn't been any bad news, and quite honestly it's been rather hammered over the previous 21 days, perhaps more, maybe less. Volume has died out, it has deviated from the market and things are suddenly quiet (this is a good sign). Bollinger Bands enter Keltner Channels on the daily chart. Sweet, this is slowly turning into a play that is starting to gather my attention. What we're looking for at this point is a sudden increase or "acceleration" in volume. This would indicate that this particular stock (assuming fundamentals have been assessed) is undervalued and holds as a candidate to squeeze and "match the pace of the market", these typically tend to be lesser known stocks featuring options that are not always as liquid as I personally wish. Often times...these guys RUN, days/weeks later and all I can do is stare at my watchlist in pain as I didn't feel fully convicted at the time.

I have tasked myself with finding ways to determine short squeeze, high, mid, and low squeeze potential based partly on finding ideal technical setups that accommodate squeeze potential in tandem with fundamental and social-sentiment matchup facilitating favorable characteristics of future price action. I was wondering if it would be possible to determine:

These would likely just be "tags", I'm not sure what you call them. I think they're called labels, at the top of the chart if I am not mistaken. Think of this way, imagine the chart you pull up has several speedometers, all expressing different rates of speed. Imagine pulling up the chart to see these "gauges", and in other words how much gas do we have on the throttle here? A real-time visualization of current rate of volume compared to historical rate of volume based on the same timeframe. The gauge has a needle that displays deviation, and shows "we're practically at a dead stop", "we have some pressure on the throttle", and "we are full throttle!!".

NYSE Up-Down Volume Comparision
Some how, the current trading volume average rate compared to the average rate based on a specified time frame which is then compared to the up-down volume difference of the market. The idea is to learn how the current volume of a stock compares to the NYSE volume based on a historical average. In other words, if there is a lot of up-volume in the market the past two days, how can we see if a particular stock is running at average or below average volumes compared to the "greater speed" of the market. This gives us candidates to take a further look at using this below:

I'm not sure if I am wording this well, so basically the objective here is to find what the current volume average rate is based on a specified time frame, and compare that with the historical volume average rate based on the same exact time frame. What we are looking for is deviation from the mean. In other words, rather than tracking of a stock and it's price is trading at the mean, but rather if the current rate of volume is deviating from the historical rate of volume.

Macro-View
The average volume today, compared to the volume of the previous (21) days.
The rate of deviation expressed as a percentage that will display a positive, neutral, and negative state of volume deviation based on the same average from above.

Micro-View
The average volume of the current (15 minute bar) compared to the previous (546) 15 minute bars featured within the last (21) trading days.
The rate of deviation expressed as a percentage that will display a positive, neutral, and negative state of volume deviation based on the same average from above.
White for +/- 5%. Red for </= -5%, Green for >/= +5%.


I'm curious if anyone would care to weigh in. Perhaps there is an indicator that already does this, or something quite similar. Really the overall goal here is finding probability. This isn't to "time a short squeeze" or "time a squeeze" at all, this is just a tool to assist in determining if probability for a squeeze is in our favor. When the conditions are met, the very last component needed is volume.

When we have found a stock that has deviated from the market (comparing volume of a stock to its historical volume compared to SPX/NYSE up-down volume, displays qualities found in short squeeze (or any type of squeeze), has a proven record of support levels, among many factors listed above...the last thing to detect is a ramp-up in volume. Whether it be the last few days, or the last 15 minute bar. When you get the set up, and the volume hits...next thing you know, you have your runner. These are easy 5, 10, 20, 40, 50%+ upside captures.

A lot of runners tend to have a low of the day that matches the open of the day, plus or minus a few cents. Most stocks that exhibit this explosive behavior grind until we get some simple signals of buyer-exhaustion, some times extending into the close.

Any takers?? I'm not sure if or how to DM here but would be glad to chat more and collaborate
Sort by date Sort by votes
T

Eh, read my post and there are a lot of grammatical things and overall lack of knowledge things going on, lol. Anyone who read this and can vaguely understand with any input is greatly appreciated. Thank you.
Upvote 0 Downvote
B

@tropicalfartbreeze @MerryDay
I think what @tropicalfartbreeze is looking for is an indicator to mimic the "volume run rate" that Market Smith has on their charts to show whether or not a stock is breaking out on above average volume or not at that point in time without waiting for the end of day to determine if the entire day was above average volume. See picture below in top left corner.... 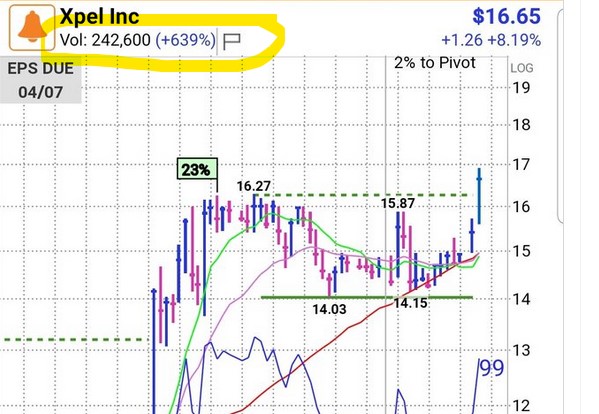 Upvote 0 Downvote
You must log in or register to reply here.