Hey Guys, found this indicator on TradingView and ported it over today. First time I have done it. No idea if this squeeze is different than any other one out there. Here is the authors notes. Be aware, my colors are different than his.

This study spots the points that are most profitable in the trend with a code color and shape. This also shows trend divergences and possible reversal or reentry points

Keeping the parameters simple, this study only needs one parameter, the length of the base moving average, which by default is set to 34.

There are seven colors used for the study

Green : Uptrend in general
Lime : Spots the current uptrend leg
Aqua : The maximum profitability of the leg in a long trade
The Squeeze happens when Green+Lime+Aqua are aligned (the larger the values the better)

Maroon : Downtrend in general
Red : Spots the current downtrend leg
Fuchsia: The maximum profitability of the leg in a short trade
The Squeeze happens when Maroon+Red+Fuchsia are aligned (the larger the values the better)

Yellow : The trend has come to a pause and it is either a reversal warning or a continuation. These are the entry, re-entry or closing position points.

When either the fuchsia or the aqua colors disappear or shrinks meaningfully it could mean a possible leg exhaustion that will have to be confirmed with the subsequent bars.
When the squeeze color appears without the intermediate color (fuchsia+yellow, fuchsia+maroon, aqua+yellow, aqua+green) it could mean this is just a shake off move, a pump/dump move, a buy the dip or a sell the peak move or a gap.

In the example there are three divergences spotted, the first one between march 2009 and september 2010 when the peaks in the indicator made a lower low, meanwhile the price made a higher high, this is a negative divergence and a trend reversal. On the second example, between april 2013 and July 2013 the indicator made a higher high meanwhile the price made a double bottom , this is a positive divergence and a reversal to the upside.
Click to expand...

Nice work on your port 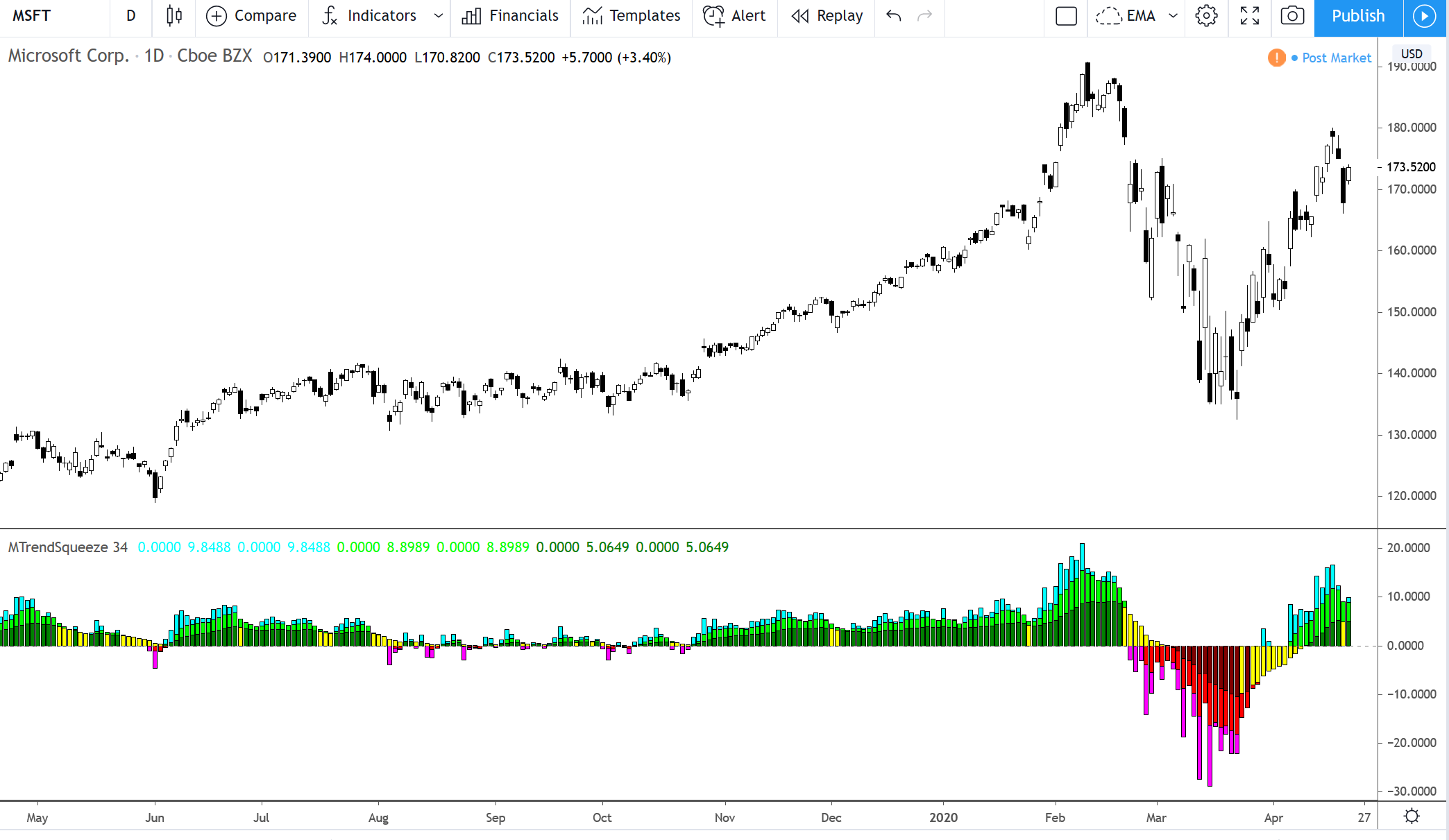 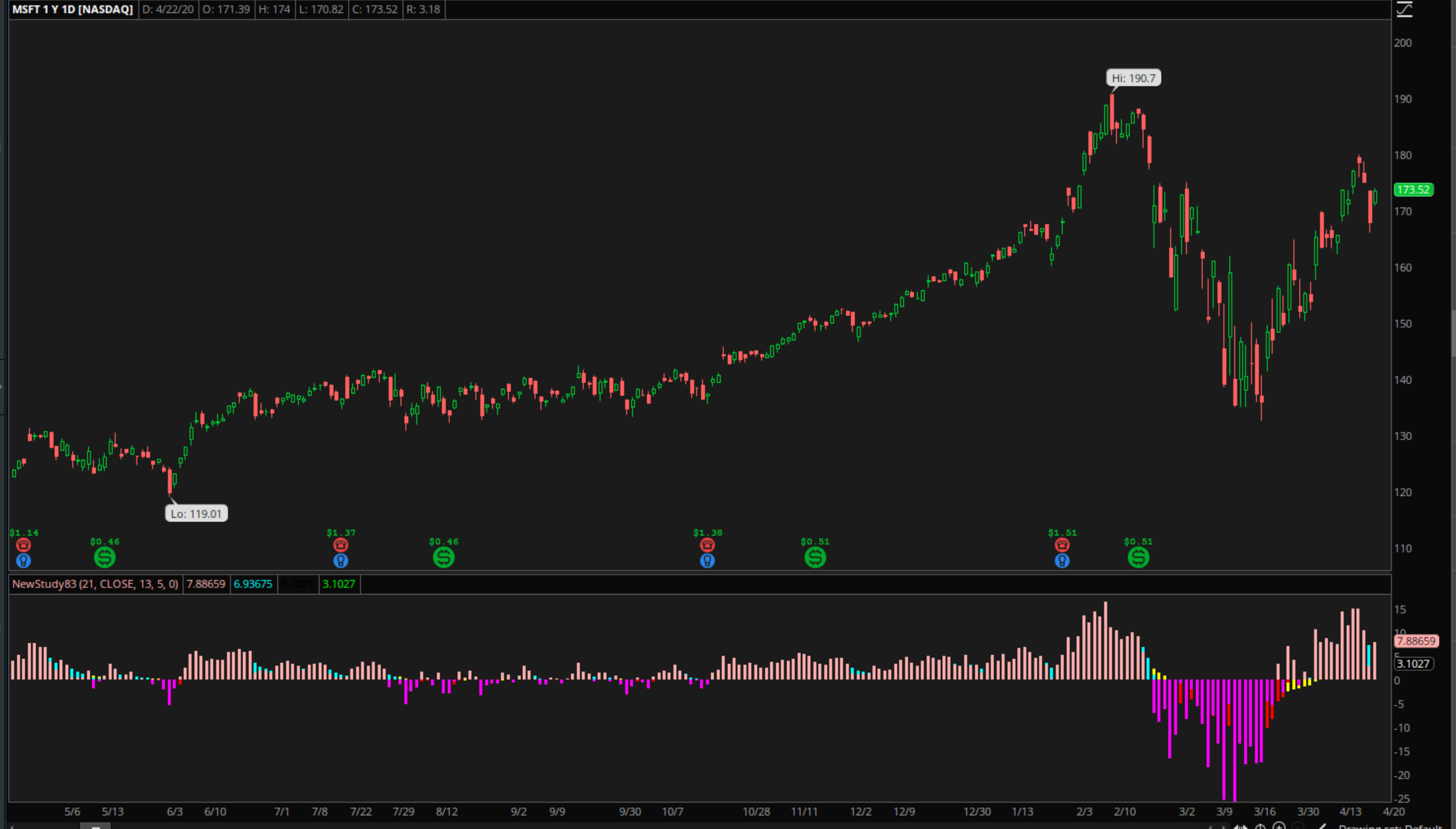 thanks again and welcome!
K


Next one I'm trying to port...
https://www.tradingview.com/v/tVtxISLu/
So far it has been difficult...
B

I agree the colors are different but 3 colors appear either above or below zero lines. Some how it's not showing up in TOS.

Something you can look.
K

@Bhai, you have to really zoom in. I was thinking about adding a bubble or arrow with the “yellow.”
D


Next one I'm trying to port...
https://www.tradingview.com/v/tVtxISLu/
So far it has been difficult...
Click to expand...

Hi @Ken_Adams thanks for sharing. Took a past an initial port;

Ken_Adams said:
@Bhai, you have to really zoom in. I was thinking about adding a bubble or arrow with the “yellow.”
Click to expand...

Will check. Thanks
D

I think your original port had the plots in the wrong order, it caused some plots to block others. I made a quick adjustment and reverted to the original colors for anyone interested.

VIP
Nice. If you prefer a white screen vs dark (like me), I change every Color.yellow to Color.light_orange for visibility. The RBG of light orange is 250, 181, 127 or similar if you need to change a dot or another shape in the code.
P

Gents, I need your help. So I'm working on the column and decided to hack the TTMSqueeze column to make it. So I got it to display magenta, cyan, red and light green. But I need a logic for yellow. Anyone can suggest how i would add that?

VIP
@Prison Mike I cleaned up the coding errors and replotted the squeeze's and changed the colors to pop out better.


Code:
You must log in or register to reply here.