Repainting is when an indicator triggers (prints an arrow, shows up on a scan/watchlist, sends an alert, buy & sells on back testing, etc) because at that moment the conditions are true for whatever triggered it. But the conditions don't stay true so later that arrow, scan/watchlist, alert, buys & sell in strategies disappear with no trail that it happened in the first place.

The Negative: Repainting is problematic especially for newer traders. Many of these indicators provide triggers promising that a stock has hit a low (or high) and is indicating NOW NOW NOW is the time to make entry and it can be right, reinforcing their belief that this is a good strategy. But it can also be wrong, it erases that signal, continues to drop like a rock, and crushes previous profits. Just the potential of that possibility causes traders to lack confidence, to leave trades early at the smallest sign of trouble, creating a feedback loop of ever-smaller profits and ever-larger losses.

No, repainting indicators can not be rewritten to not repaint. Repainting is part of their DNA.

Positive Side of these Indicators:
How do you know if an indicator is a repainting indicator?
If you look at a script and if there is a fold operation using highest and/or lowest that is the indication that it repaints.
Fold is a recursive operation that keeps redefining the highest and lowest and redrawing them.
Generally, if you have an indicator that shows buy and sell signals on your chart and every single signal works out perfectly, such as: Trend Reversals, Zigzags, Swing High, Swing Low, COG, Hurst indicators, some Pivot Points, etc... then most likely that indicator repaints. Looks great for backtesting because all the false signals and bad buy/sells are erased.

Other REPAINTING-type Behavior:
In TOS, an indicator can be triggered and signal prematurely during the formation of a candle because the conditions are met but the signal can disappear by the close of the candle if the conditions for the signal do not hold true. A workaround would be to be scan/alert/paint the arrow on the prior candle and/or do not trigger your scan/watchlist/alert/arrow/signal based on just one study. This holds true for reducing many types of false signals.


This information was compiled from the various posts written about repainting. A search of this forum will provide the detail from which these statements were derived.
HTH
Last edited: Aug 8, 2021
Sort by date Sort by votes

'Generally' too complex scanner messages means that the study is not scannable. However, 'sometimes', the problem is just too many extraneous statements which are not related to the logic needed for the scan. Writing a separate study with the extraneous removed puts less strain on resources and will then sometimes run successfully.

Another work-around that posters have sometimes had success with is to limit the data pool that you are scanning against. Scanning the Universe of Stocks is never recommended. Scanning a watch list of your preferred equities, scanning the DJIA or NASDAQ 100, or limit on volume, market cap, etc... Anything that will require a considerable less amount of TD's resources will occasionally get around the too complex error.

Yet another, work-a-round is to re-write the one study and break it into multiple studies. Then run the scan in parts. Do some calculations, save results to a watchlist and then run the rest in the next scan.

However, a majority of the time, the problem is built into the complex logic of the study and then there is no work-around.
Supertrend, the Trend Reversal Indicators, and other Repainting Indicators are generally too complex to utilize the TOS Scanner or to use as WatchLists.
Last edited: Aug 8, 2021
Upvote 0 Downvote

There are alerts written into studies. They only alert when the chart w/ the study is open on your screen​
They cannot be sent to phone/email. They cannot have custom sounds.​
​
There are alerts created on a chart for one specific stock that you want to alert on. The alert will only fire once. At that point, the condition has been met, the alert expires. No, this can't be changed.​
​
There are scanned watchlist alerts which alert whenever the results of the scan changes. These alerts can be 3-7min delayed.​
​
Alerts blinking by too fast? To see all alerts: click on the message center
Want to see a list of alerts all the time? detach the message center 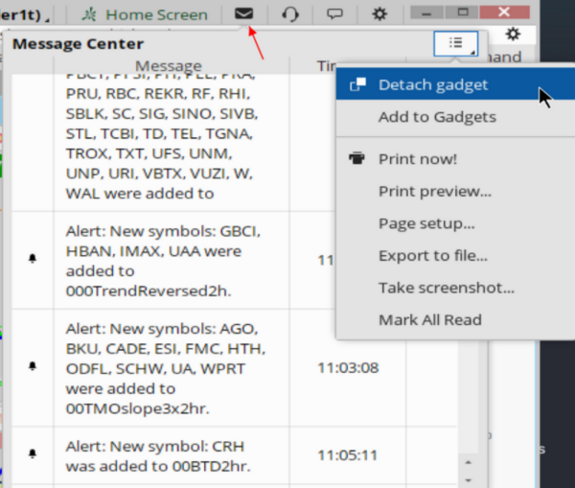 Staff member
Staff
VIP
Guidelines For Posting To The UseThinkScript Forum
If no thread exists for the indicator you are referencing. YOU MUST PROVIDE THE CODE. Not a link to a YouTube video or to some other site. Nobody can help modify an existing code unless the code is provided. To share code in your post, click on this icon at the top of your post and then paste the code.

Lastly, be concise and complete in your query. "It's broken" isn't a detailed enough explanation. What aggregations have you tested?
Which equities? etc.. Pictures are worth 1000 words. Not providing screenshots severely limits the type of assistance that can be given. HTH
Last edited: Aug 18, 2021
Upvote 0 Downvote

The TOS built-in mobile indicators work on the TOS mobile app.
Custom indicators that utilize vertical lines or labels or bubbles or clouds or color changes for slopes and lines and things like that do not work. Read the Mobile Tutorial for more information

Having Problems? Does the MTF indicator appear to be not working or partially working when you load the study onto your chart?
A common error when using MTF indicators is trying to use a time frame that is lower than the chart you are posting it on. On the TOS platform, you can display data from a higher timeframe onto a lower timeframe but not the other way around.
https://tlc.thinkorswim.com/center/...hapter-11---Referencing-Secondary-Aggregation

Staff member
Staff
VIP
How To Search Long Threads
Don't want to read all 30 pages of a post? Just want to find the scan, an alert, a watchlist for the study, you are looking for?
Here is how:

If you press the "G" part of the "Search" button you'll get an even longer list of Google Search results, so start with the standard "Search" first and if you're not satisfied then try the "G"...
Thanks to @rad14733 for this tip.
Last edited: Jul 27, 2021
Upvote 0 Downvote

Staff member
Staff
VIP
The Basics for Developing a Good Strategy
Are there traders that make money and don't follow these basic tenets of Technical Analysis? Absolutely! But if you are not one of them, incorporating these concepts into your strategy could help.

You can google the basics of a good strategy for more information. This Technical Analysis Cheat Sheet link has a whole set of articles, I found informative in helping me develop successful strategies. Do not be put off by the word 'dummies' in the title. These articles are comprehensive but understandable. HTH
Last edited: Aug 4, 2021
Upvote 0 Downvote

Staff member
Staff
VIP
How to take perfect screenshots:
Mark up your screenshot using an image editor so we can understand what you want us to look at.
Then to upload your screenshot to this forum, follow this tutorial:
https://usethinkscript.com/threads/how-to-insert-image-in-a-post-thread.277/
HTH
Last edited: Mar 27, 2021
Upvote 1 Downvote

There may only be 1,100 - 1,500 Custom Watchlist Fields displayed in the TOS app at one time. It is necessary to either have fewer results populate the watchlists or have less watchlists. There is no work-around for this limitation.​
​
Upvote 0 Downvote

Staff member
Staff
VIP
Adjust the distance of the Arrows to the Candles
The following snippet controls the placement of candles by using a percentage of the bar range.
The higher to value, the candle is further away from the candle. Smaller the value closer. 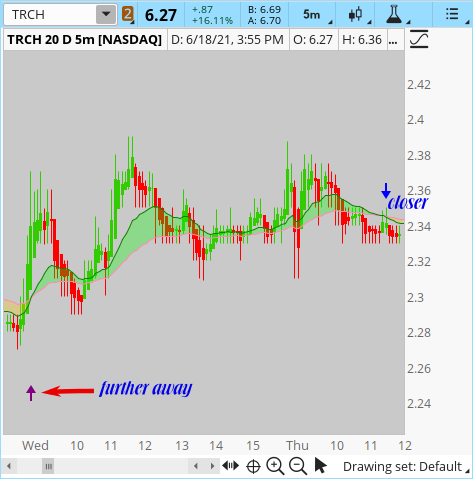 Staff member
Staff
VIP
How To Color Your Clouds
Make cloud colors modifiable and/or change the opaqueness to lighten the clouds so they don't overwhelm the candle color.

The following code snippet is an EXAMPLE of how to use GlobalColor.
To use the example in your code, you would add DefineGlobalColor statements for each color you want and then you put those GlobalColors in your AddCloud statement in place of the color. variables.


Code:
Once GlobalColors are defined, click on the gear icon, next to the study and change the opaqueness 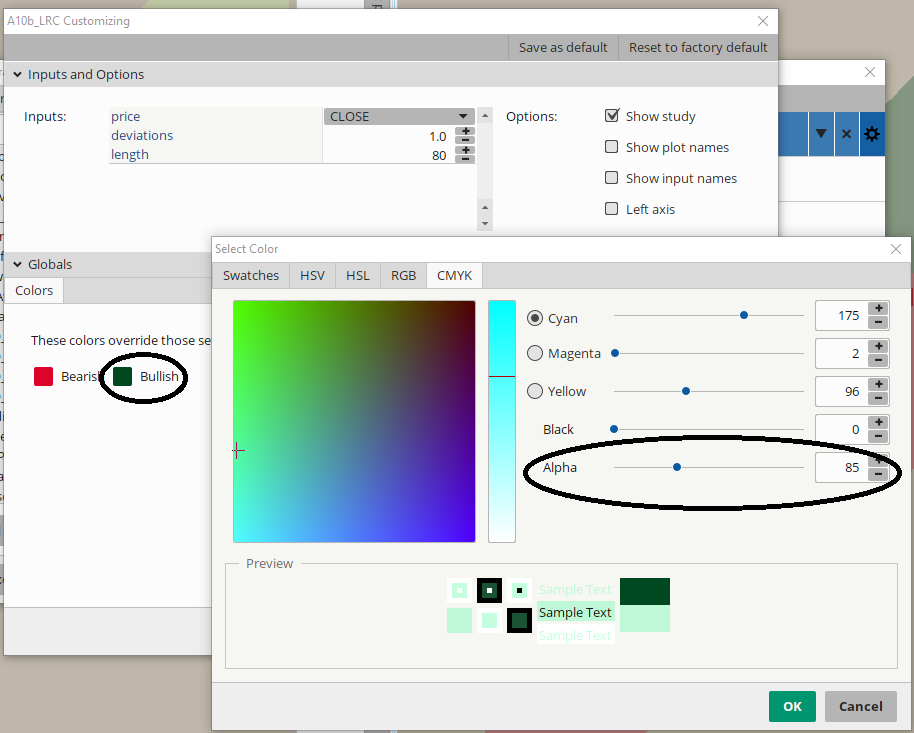 Staff member
Staff
VIP
How To Add A Watchlist Column 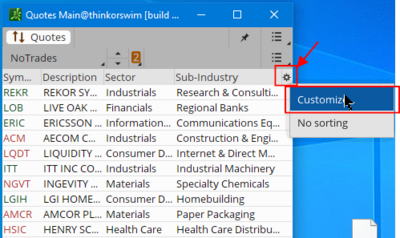 If you click on the drop-down arrow, you will see all the indicators available to populate a watchlist​
If you know the indicator that you want, you can type it into the box​
click on Add Item​
click on OK​ 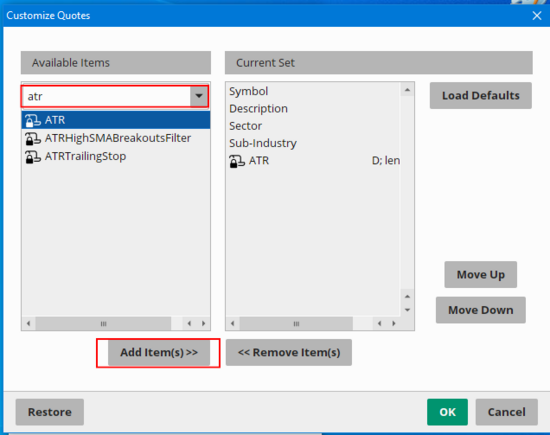 Staff member
Staff
VIP
Creating A Strategy From A Study
All you need to convert a study into a study is the following code snippet. It should be added to the bottom of your study and then the study needs to be cut&pasted under the Strategy Tab.
Ruby:

When creating plots in thinkscript you not only have to define the logic of what you want plotted but you must also state WHERE on the candle or line that you want it plotted. (IE the low, high, open, close, of the candle).
An example of the syntax is if mycondition is true then low else double.Nan (print nothing)
Last edited: Aug 11, 2021
Upvote 0 Downvote

The secondary aggregation period cannot be less than the chart that it is being displayed on. Higher timeframes can be used on lower timeframe charts but not the other way around.
https://tlc.thinkorswim.com/center/...hapter-11---Referencing-Secondary-Aggregation

You can read about it here:
https://tlc.tdameritrade.com.sg/center/howToTos/thinkManual/Scan/Stock-Hacker/studyfilters
Last edited: Aug 26, 2021
Upvote 0 Downvote

Staff member
Staff
VIP
Combining Two or More Indicators
The easiest method to see signals from two or more studies is to set up a scan for the various study triggers. The results will only be those candidates that have met all your conditions. This method can even eliminate the need to have those studies on your chart if you are in need of real estate. This method is favored over attempting to create a kitchen sink indicator as it is much easier to change out indicators as your strategy develops.

Combining multiple indicators into the same lower section is not recommended due to scaling issue. When you zoom in and out, it shows different values.. It's like mixing oil with water
Last edited: Sep 5, 2021
Upvote 0 Downvote

The ToS platform does not allow backtesting of anything other than strategies. The Strategy script needs to contain all the conditions necessary to create the AddOrder statement.
Last edited: Yesterday at 8:16 PM
Upvote 0 Downvote