I am trying to locate Hurst Exponent. I came this while reading thinkScript manual where @AlphaInvestor uses it as follow: I use it to gauge whether the price is Random (Chop) HE = 0.5, Trending (HE>0.5), or Mean Reverting (HE<0.5). Please advice where i can get the script and more info about this indicator for day trading/scalping.

I am fascinated by the Hurst Exponent and interested in its use in determining if a price is persisting, reverting, or random across timescales. This is a lovely departure from the i.i.d. stochastic processes touched upon in my undergraduate probability and signal processing courses. I am still absorbing the significance and nuance of Mandelbrot's: The (Mis)Behavior of Markets, and scrutinizing the heaps of curious tools, scripts, and scratches I've trawled up from the internet which are in varying degrees of disrepair and decay.

Given that neither of us can find such a function within ToS or just about on the wide web, I have been interested in implementing the following approximation of the Hurst Exponent, which I found in a YouTube Video from Paralax Research (the manual for their Bloomberg Application is here, page 37 onwards is interesting for our purposes). The approximation discussed in their YouTube video is as follows: 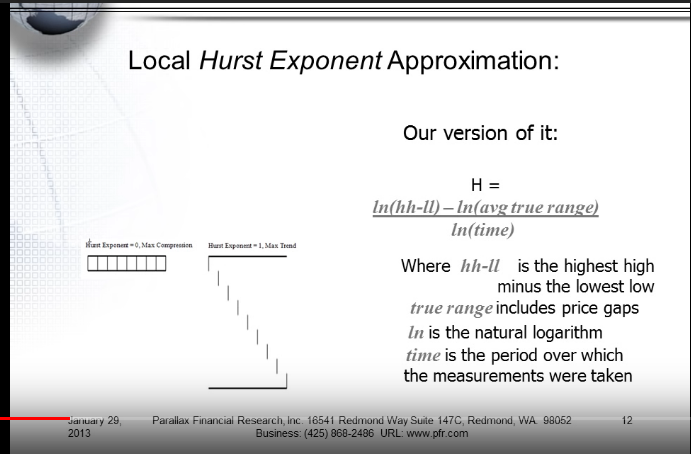 Let me know what you think of this approximation. I have been a little bit frozen on this because I also want to check it against calculating the Hurst Exponent with the same data in a different tool, and probability was not my strong point in engineering school.
Last edited: May 10, 2020
K

VIP
Hi @sniktau After searching whole day I came across Hurst channel code from Trendxplore website. Hopefully @BenTen @markos @horserider can help us with this topic. Thank you for the Paralax Reseach. I am not at all a coder but trying to learn. This site is great place to understand all the fancy and useful tools and suggestions.

VIP
Looked at these long ago. If I remember correctly the inputs need to be specific for the stock you are charting. Maybe that was a different band indicator. Just too long ago to remember correctly. Anyway I dropped it due to that problem.
K

Thank you, @KKaiser, this is another interesting tidbit but just like I've observed from looking at other tools scattered about, there's clear deficiencies or missing dependencies that make them hard to use, as @horserider mentioned. Now, with that in mind, I'd like to pore over the code you posted and see what else is associated with it.

... the inputs need to be specific for the stock you are charting
Click to expand...

What do you mean by this, Horserider? How did do you tune the inputs? How do you know if they're set sane or insane?
T

As a word of caution to those looking at Hurst bands, the indicator repaints many candles back as it uses forward price action to adjust where "center" is. @sniktau what horserider is saying is that you will need to adjust the settings for each time frame and each asset you trade. For example: I use hurst bands on a 1min chart for MES with length 400 and deviations set at .5, 1.0, and 1.5 respectively. I start scaling in shorts when price enters the upper highlighted zone, start scaling in longs when it enters lower highlighted zone, with the expectation of scalping profits the other way back towards center channel. BUT if I switch to a different time frame, these settings will not work. If I go with still a 1min time frame but on SPY instead, those settings most likely are far from optimal. This is a usable tool, but important to understand its limitations.

Thanks for the reply @tradebyday, I will apply your defaults to this interesting plugin and see what it does with that instrument and timescale to calibrate my sense of what it "should" look like, but I still am without a means to systematively calibrate the Hurst bands study for other times scales or instruments. How did you figure it out the first time?

I am also a bit disinclined from using this tool because I want to do analysis at multiple timescales and present it in the "thermo" style window. Hurst at one timescale? Good, but not especially insightful.
T

No problem @sniktau . Ya a trader on twitter had some settings he shared, so that's how I got something close to his. The longer length is needed to keep the repaint from being too drastic, but the deviations of the bands will need major modifications between each ticker symbol and each timeframe. The hurst bands I have settings for are a tad extreme and therefore do not yield reversal trades every day, which I prefer since I trade multiple strategies in a given day based on what is presented to me. But at the end of the day, it is more of a scalpers tool, rather than a trend trading tool

I am happy to release the first pass at a simple, local approximation of the Hurst exponent. This is a work in progress and this post is already taking up too much of my lunch hour.

What is the Hurst Exponent?

It's a measure of a time-series' feedback on itself, or its memory. If the exponent is found to be 1/2, the time series is moving "truly" randomly, and towards 1 or 0 it is either displaying positive feedback or negative feedback, respectively. It was developed by the hydrologist Harol Edwin Hurst in the 1950's to figure out how large to make a dam to deal with all of the possible flooding outcomes. It is directly related to the fractal dimension D. Please read more from Wikipedia or (Mis)Behavior of Markets by Mandelbrot.

The equation from Wikipedia is as follows:

Hurst used the following equation for the Nile. He found it to be ~0.73 for that river.

Mandelbrot suggests the following for R/S from p. 288 of the referenced book:

Okay what does it mean that it's related to the fractal dimension? It basically means that for a time series, the value of H corresponds to how rough the time series is. Let me break it down:
This measurement is taken over multiple timescales, ideally disparate-scaled ones extending deep, deep into the past.

That seems like that math takes ages to do in thinkscript, is there a faster way?

As mentioned in another post, here is a local approximation of the Hurst exponent which can be used:

Local to what? That time range. The Hurst exponent for one time range is hardly insightful. It is more useful to see what it is at multiple timescales. Which, finally brings us to:

Here is the thinkscript study:


Rich (BB code):
I suggest you run it in thermo mode. I've been using a range of 3-32. I tried making defaults in the above script but it breaks ToS...

This script ****s. I have the following improvements to make:

Staff member
Staff
VIP
Lifetime
Thanks for the detailed post.

thermo mode is a revelation for me, thank you so much.

Thermo mode may be cool for an indicator release in the future. I never knew about it but it could have a lot of cool applications.

Oooh! If you haven't already, look at my first post for more on thermo mode!

The entire documentation on the thermo commands is as follows as an afterthought in an Appendix, and if you try it, it might break TOS:

Those aren't comments, either, they're meaningful settings and for me it broke things when I tried it out. In a way, the form reminds me of C pragmas, but I doubt that's what these are called since I'm assuming that thinkscript is interpreted. Anyway, point is: this is a very weird and underdocumented part of the thinkorswim platform. Not many settings, which makes my goal to see semi-log plots of H frustrating.

I want to know more and I am at my limits. I'll reach out to TD Ameritrade to see if I can enrich our hot, entropic, thermo-charting.

in variables ll and hh why is the previous bars values used?

Good question, I think I somehow assumed along the way that high and low had to be indexed into and just never went back, I think I should change it to be at the current tick.

For the heck of it I tried using LowestAll(low) and HighestAll(high). I'm quite surprised at the difference!

The second case is interesting, and I suspect it might be more on the right track actually and my old plot approach is suspect.

This is a little awkward, @KKaiser. I don't mean to be rude in any way by posting about this subject. I realized in my response to your post, I had so much more to say and explore, that I realized I should just make a new thread with my attempt at a specific approximation. I'm not quite sure to what you're taking offense? Posting a response to your thread or posting this new thread?

As an aside: I joined this forum initially to work out how to present the Hurst exponent as well as multifractal time in a technical indicator or series of indicators, and so I had collected some stuff on the matter, but didn't know how to put it together or who to share it with, until I came here...

If its a matter of "hey I brought it up first": @BenTen can look at the edit history of my very first post here from last Thursday and see that I actually removed a reference to the Hurst exponent (I thought that it was irrelevant to that specific question and edited it after the fact, but I guess I should have been talking about Hurst in every single post after all.).

@tradebyday I would like to investigate KKaiser's Hurst find some more because it never occurred to me there was a way to map that measure to bounds on a price. I haven't looked at the script too closely yet but I've tried a few input parameters against a few stocks but I don't know good cal from bad cal.

What is the handle for that Twitter trader? Do they give out unique calibration parameters for the Hurst channels when they discuss a stock?
K

VIP
Hi @sniktau, no offense, just thought we could have continue this conversation on the post I posted. I am very thankful that you that you came up with a cool formula. Sorry if I made you feel uncomfortable
You must log in or register to reply here.