Be careful with the original script, since it doesn't count the entries when they occur in the bar following the last exit.
Anyone have any idea where the error might be? I can't find it.

OP's script is very useful, thank you very much, and as I started using it, I've also noticed discrepancies in the counting of trades.

I can confirm this script is not counting the exits if the next entry occurs on the bar following the exit bar, but this only results in wrong number of trades, not their P/L. 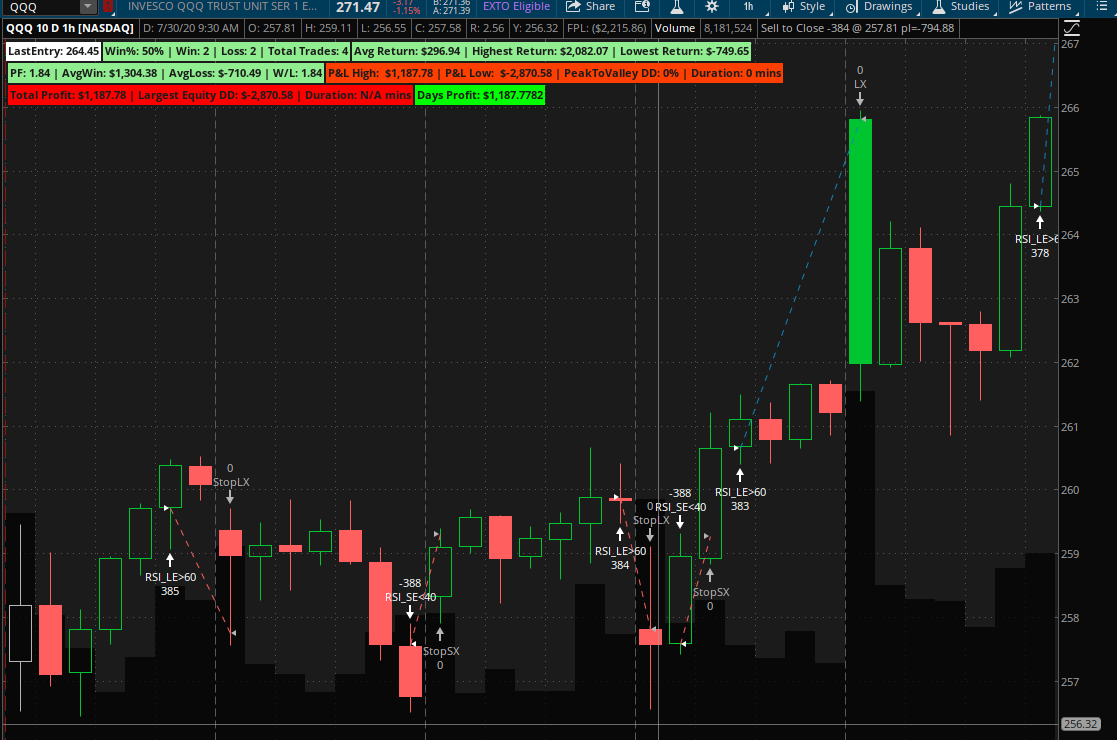 There are 6 trades in total, but the script only counts 4 trades, missing the 2 back-to-back losing trades around the cross-hair. However, their P/L are included in the next trade's FPL, which is a winner, but is now a smaller winner after the two losses are included. As a result, the final FPL is always correct, which I made sure by running the strategy with and without the floating P/L script.

When the debug mode is turned on, you can see it more clearly. See image2: 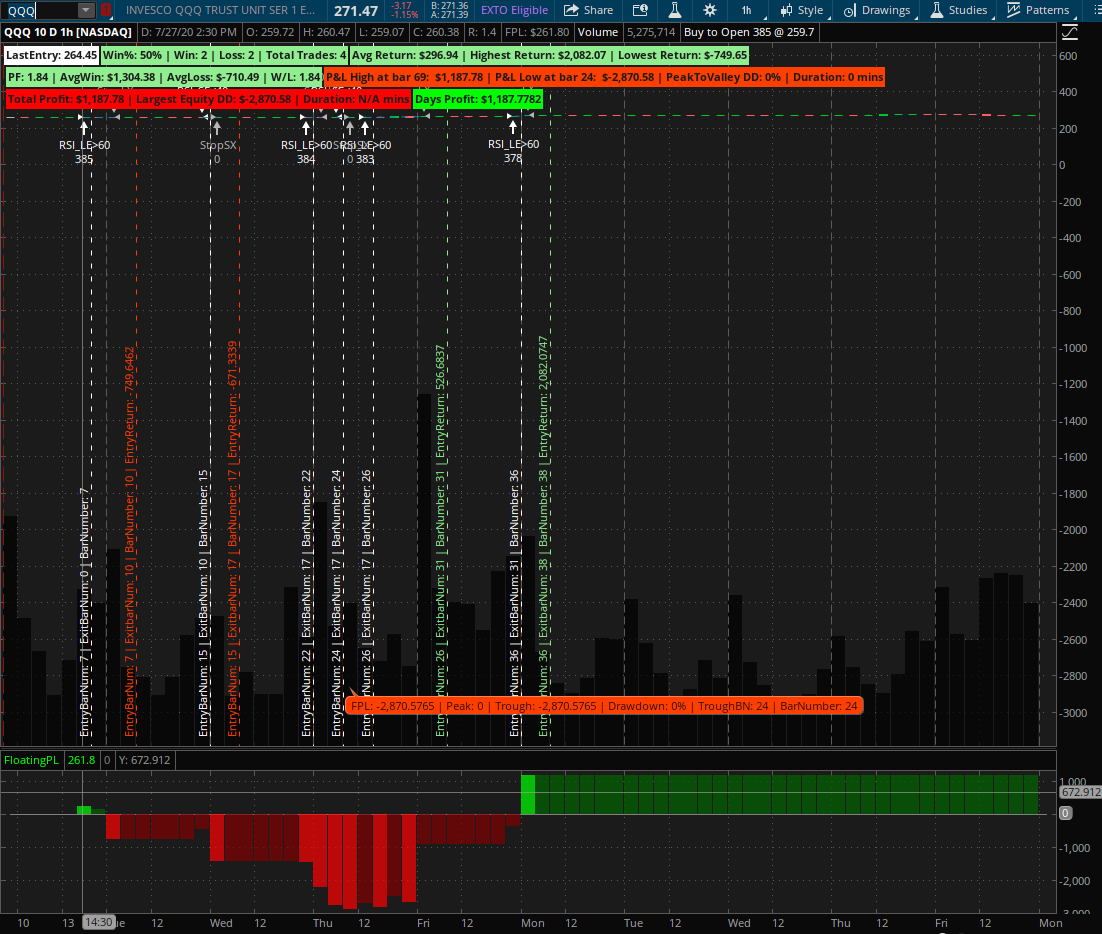 The exits for trades at Bar 22 and Bar 24 are not plotted, and we only get the exit plotted at Bar 31.

Even though the exits are not counted, they, and the resulting P/L, ARE still tracked by the script. But I don't know how the codes should be corrected.

During testing, I've also noticed another issue of this script regarding Peak and Trough and therefore the calculation of max drawdowns. They seem off a lot of the times. The above image also illustrates how it's happening. The cross-hair marked the peak P/L at 261.8 (not plotted by the script) before the Trough plotted by the "FPL: -2870.5765" bubble. The bubble states that Peak is 0 and the Drawdown is 0%. I think the drawdown should be from 261.8 to -2870.5765 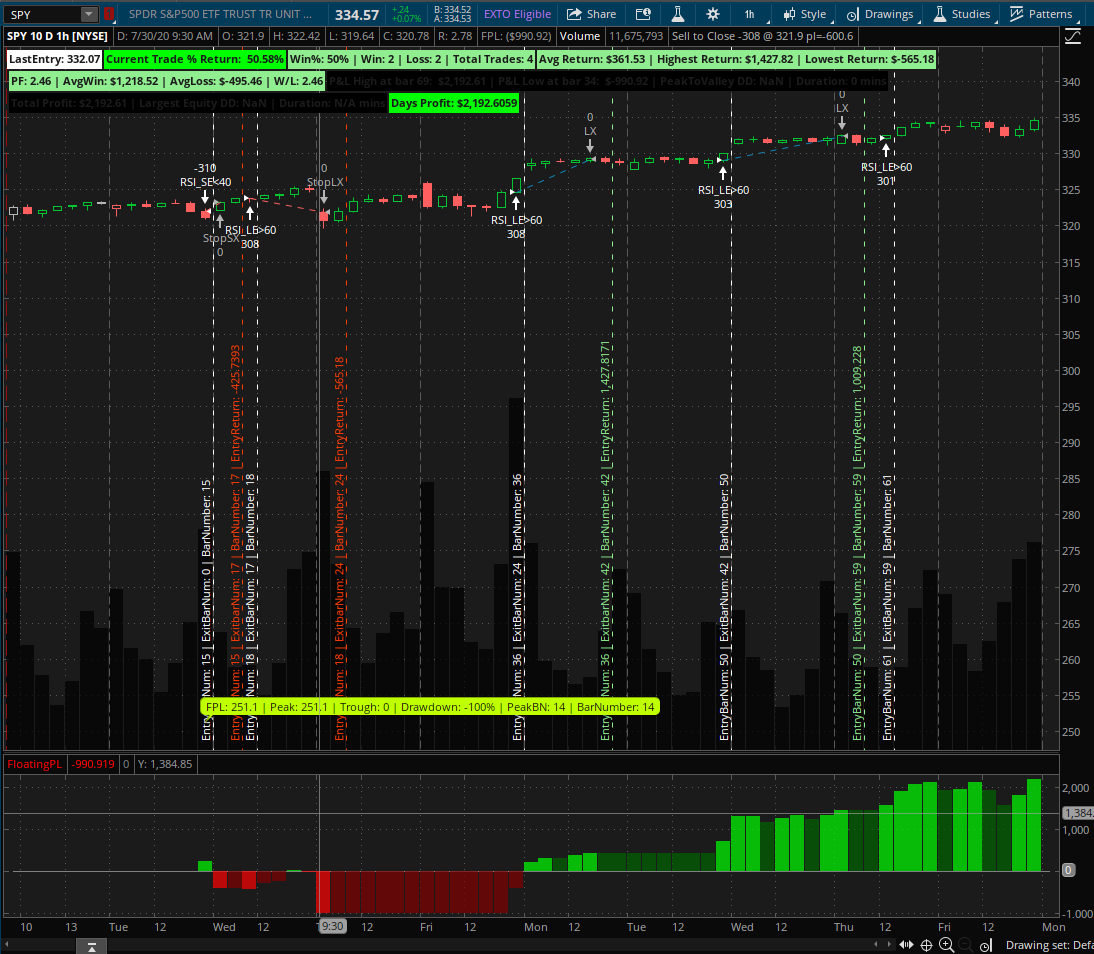 Here the peak of 251.1 is plotted by the yellow bubble, but the trough of -990 at the cross-hair is not plotted, resulting in the floating labels not showing PeaktoVally DD (=NaN).

I may be misunderstanding the definition of PeaktoVally, though, so please let me know if the script is in fact accurate.

Zara2 said:
I can confirm this script is not counting the exits if the next entry occurs on the bar following the exit bar, but this only results in wrong number of trades, not their P/L.
Click to expand...

Ok, it doesn't affect the P/L but it does affect the rest of the ratios, since by miscounting the trades, the WinRate, WinLoss and AvgReturn ratios are wrong. As it's written, this script is useless ... We've to fix that error when counting trades, how? I don't know...
Z

I'm able to make the script recognize more exits by changing this line:

Code:
However, it's still not counting the exits if there's an exit and entry on the SAME bar, such as stop and reverse type of strategies. Further tinkering around the entry and exit variables (such as deleting the "!hasEntry" condition) did not result in any more improvement.
M

Great! That works! Thank you!
F

hi, i am getting error, please can you share the new script with the changes? thank you very much
M

FOTM_8888 said:
hi, i am getting error, please can you share the new script with the changes? thank you very much
Click to expand...

VIP
@eddielee394 I have an indicator/strategy that needs something to decrease repainting, I think portions of this could resolve the issue.
Last edited by a moderator: Sep 7, 2020
L

I have a question, below is my simple strategy that I am trying to back test, I don’t have any question regarding the “BUY” portion of this script however, I do have some questions regarding “EXIT” part.

So what I wanted to do is have either or option, meaning if my stop loss is triggered then exit else exit based on MACD avg crossing above value line. Any ideas as to how I am able to do that?

The added image is how I was thinking about putting my stop loss, basically, stop out when price crosses below the low of the candle prior to the “entry” candle.

Code:
Thank you for your time, and help as always

Staff
VIP
@Learnbot You would need to create another sell condition for your script as a stoploss. This way, the strategy will trigger a sell if the stoploss condition appears before the original MACD sell condition. I hope that helps.
L

BenTen said:
@Learnbot You would need to create another sell condition for your script as a stoploss. This way, the strategy will trigger a sell if the stoploss condition appears before the original MACD sell condition. I hope that helps.
Click to expand...

Thanks ben for the input, i was thinking along the same line as you suggested however, I got stuck because I am not able to figure out how to script so stop loss would be low of the bar prior to the entry signal.

I wondering if someone has a simple script plug-in that will calculate the win rate, profit/loss, largest winners, largest losers, etc. of a strategy. The FloatingPL indicator is good for how much money you could potentially make, but just isn't enough info for me. Just looking for some extra statistics to further confirm or tweak my strategy. Appreciate any help!
You must log in or register to reply here.