I am not VIP member yet, however, thinking about subscribing to your discord and obtaining the "buy the dip" indicator. I just wanted to check something before I subscribe to VIP, would you be able to post an example of 1min chart for TSLA, Apple, ZM or whatever else stock you see fit (not penny stocks plz since I am not that educated to trade small caps yet). I wanted to see if Buy the Dip works for day trading as well as swing.

Edit: This thread has gotten very long. Added some info below for easier access to information.

Helpful links for anyone interested in seeing how VIP members are using the BTD indicator to trade:
Customer's reviews:
More reviews can be found here: https://usethinkscript.com/threads/buy-the-dip-indicator-for-thinkorswim.3553/post-34186
Last edited by a moderator: Jan 24, 2021
Sort by date Sort by votes
J

VIP
Good Morning @BenTen, I will definitely buy the VIP subscription as i totally decided with the BTD indicator. Im pretty sure it will help me on my weekly spreads option strategy.
Will try to do the payment today and i will need the Tradingview authorization (i have seen the link for that post) as im a NON US citizen and i cant use TOS
Happy to be here with all of you, happy summer¡¡¡¡
Upvote 0 Downvote
B

pjk said:
@Gellidus, I'd be happy to share some more examples. I mostly sell put options - as I said I came into this through the covered call angle and selling put options has the same advantages of covered calls without tying up the capital having it available for other nice intraday or trade ideas, When I sell puts, I go by the mantra that I would not mind owning those particular shares - with the put discount. I also sell a few naked calls - almost always in combination of a credit straddle or strangle (I did a god number on BA although the IV there is lower). I actually got into this due to NKLA earlier in the year and made huge profits due to the insanely high put premiums (they had ~300% IV at some points) even when NKLA dropped. The NKLA party was over when their warrants expired and the put premiums dropped and the risk/reward was not there anymore.

The advantage of selling puts on dips with strike prices at support levels is that even if you are wrong and the stock still goes down it often bounces or at least hangs around the support level and you still end up making the max profit. In some cases it goes through support and you might still break-even or slight loss. However in that case future put options will be all the more expensive and I then roll forward to the next week/period for even more jiucy premiums. A swing trade doesn't always work out directly in a week but often the following few weeks. Basically if you enter at very low RSI/Bollinger levels with BTD and at support you move the probability in your favor. By selling out of the money puts (I sometimes also sell ITM puts for extra protection) you further move the probability to your side. Going by protection over max profits has worked well.

To your questions:
1) Are you selling naked puts once the indicator of the BTD appear? Sort of but not always. I have given the explanations with the images on reasonings for trade entry.
2) What is the ImpVolatility indicator with RSI are you using? Can share the link? It is not an indicator. I ran out of room on the TOS GUI. No need for the volatility to take up an extra row by itself so I plotted it on top of RSI. It got crowded when on top of other rows like MACD...I mainly enter on price action but do keep an eye on volatility. I have entered some trades when IV spiked (especially when selling credit straddles and strangles) since when selling options premium IV outweighs smaller price swings quickly (there are a number of good Youtube videos on that effect).
3) How do you scan for optional stocks with high Volatility? Yes good question. I'll paste my TOS scan for that. I am then sorting out by stocks that are near support and also have weekly options (I haven't found a parameter to search for weekly options) since that allows for a lot more possibilities and more deterministic outcome.

Also, for every trade I have a live Excel spreadsheet that gets the feed from TOS with the underlying price and all relevant options parameters and greeks. This is basically a must when watching call/put spreads, straddles and strangles and to decide when to close early. It's also nice to see profits rise in real-time due to time-decay. I am also tracking the cost basis of the combined trade. Sometimes a trade sequence stretches for weeks when I keep selling repeated puts or calls and each premium goes against the cost basis until finally the put option expires worthless or the covered call gets called - typically for a profit of the whole sequence. The nice things with covered calls/puts is that if the stock goes down I'll keep lowering the cost basis on a weekly basis with new premiums until you almost force a profit.

Enough of the background, I have picked out another example - this time of GOLD (it had ~40% IV in November when I traded it - so not super high but at the end of November with everything rallying I frankly was running a bit short on good trade ideas).
I'll show two charts: #1 shows the longer support of GOLD from 5/28 at ~22.50 (nearest strike price option). With that info in mind I watched as the RSI dropped. I often start scanning for RSI<40 on TOS to see which stocks are becoming possible candidates. As said at the end of Nov with a full rally going on there weren't many candidates but GOLD was one of them.
Trade entry: I saw GOLD show up on my daily RSI scan for a few days and was looking for a good entry. BTD had already flashed multiple buy signals and BTD_percentile was negative waiting for a pop but I was waiting for RSI to definitely be below 30 but show some signs of stabilizing. On 11/24 that happened and I used the drop in the last trading hour for entry. Intraday RSI<30, BTD around 0 and BTD_percentile again negative and waiting for a pop up. I'll paste the trade timestamps below.

Outcome: The GOLD puts nicely expired on 12/4 and I could keep the full premium. Note, we are not talking about huge amounts here but I mostly go by steady small amounts and those add up very nicely to a big amount in the end. GOLD has since then been bumping around $23 as shown on the chart and maybe there's another entry again but RSI is higher now. If BTD flashes another buy signal I might look into it. 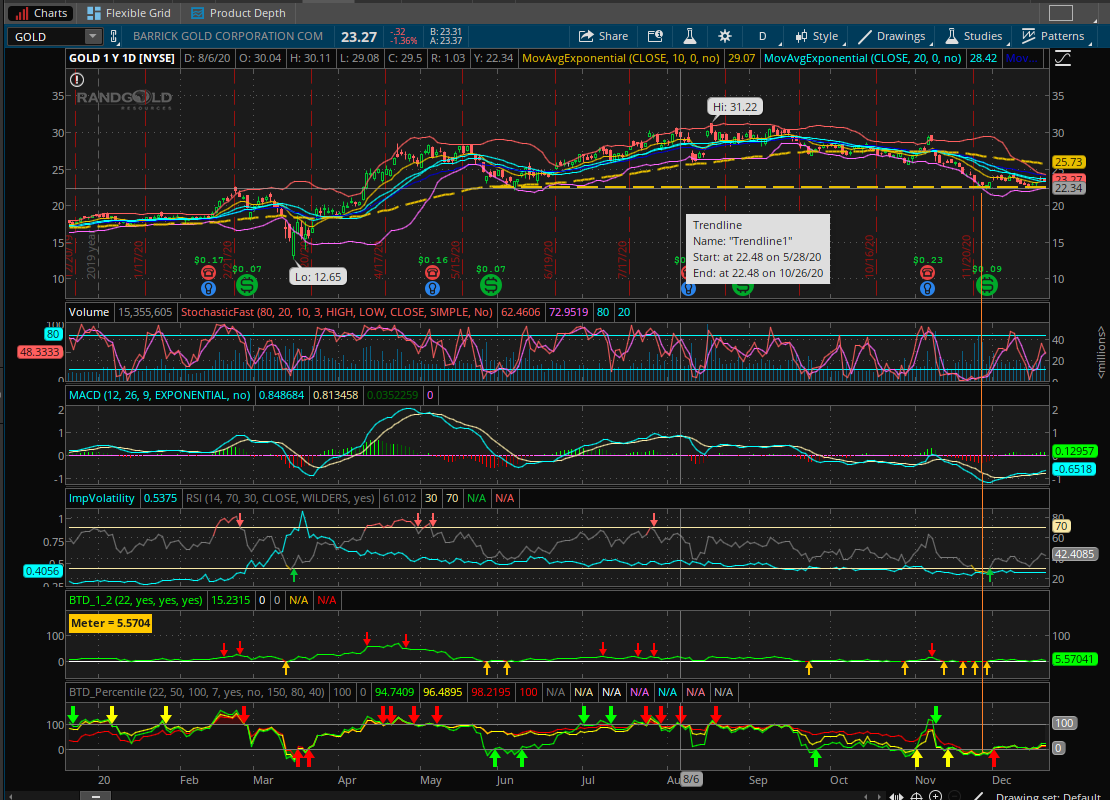 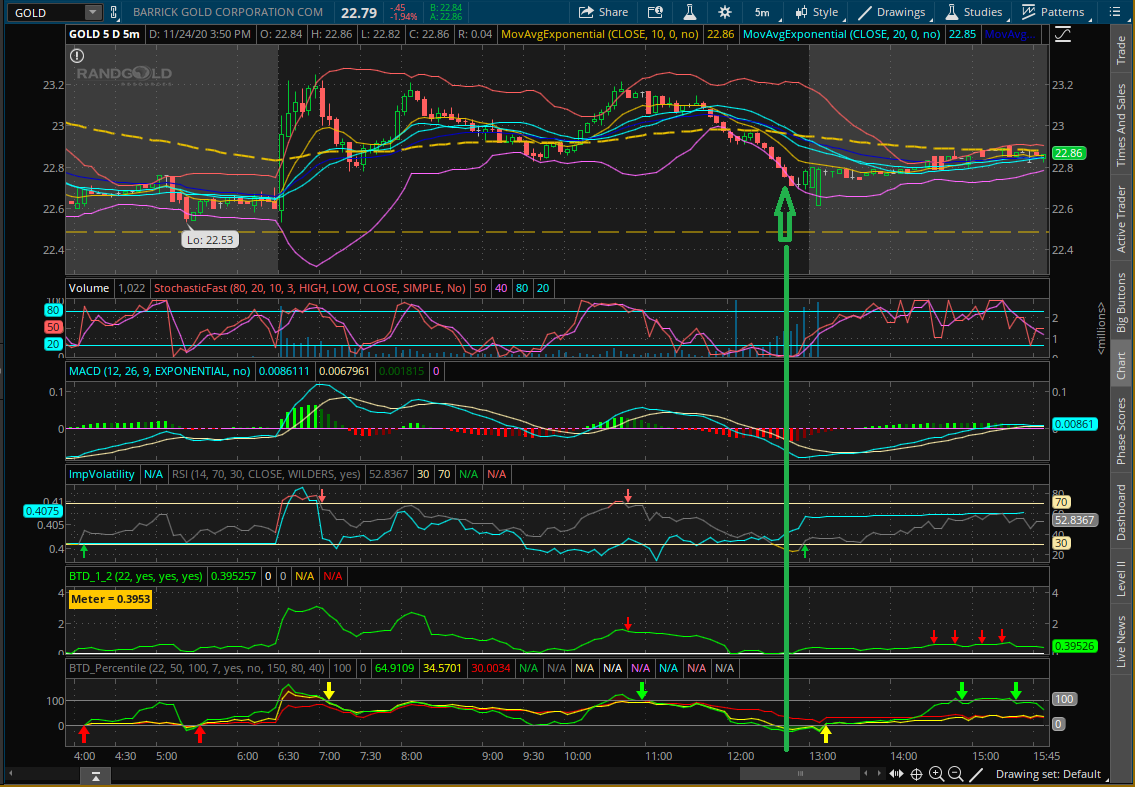 High IV stock scan (I was originally looking for individual options in this scan - it might be time to take out the options specific parameters and search by the stock only): 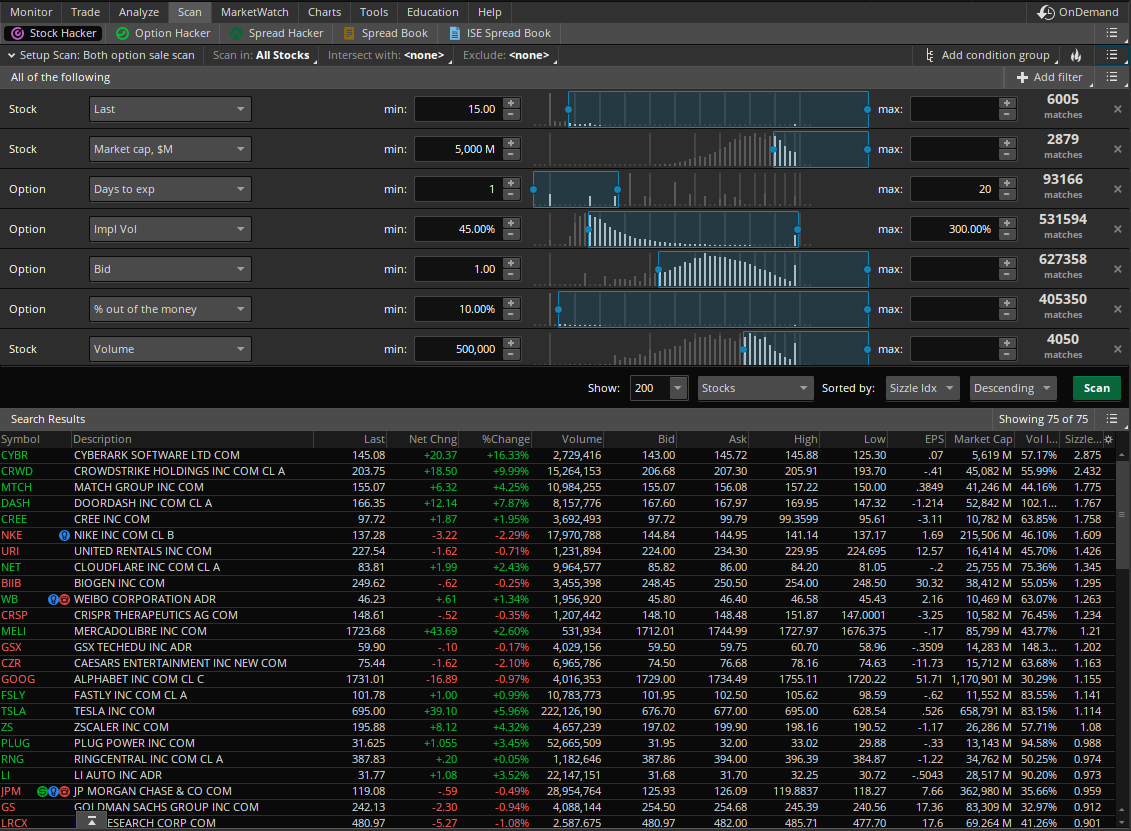 Hi PJK... Could you please tell me how to get data feed from TOS into Excel? Thanks
Upvote 0 Downvote
J

VIP
Hi @BenTen ,VIP account payment done, let me know when im ready to use the super indicators , will ask for tradingview indicator as i trade there.
Thanks for all
Upvote 0 Downvote

MerryDay said:
@JorgeLUC The premium indicators can be downloaded from here:
https://usethinkscript.com/forums/premium-indicators.36/
Click to expand...

@MerryDay Thanks for the support , im waiting for the tradingview script activation as i cant use TOS (European Citizen). Thanks anyway

JorgeLUC said:
@MerryDay Thanks for the support , im waiting for the tradingview script activation as i cant use TOS (European Citizen). Thanks anyway

This has been completed. Welcome to the forums and community!
Upvote 0 Downvote

Are there any videos that show off this indicator?
Upvote 0 Downvote

Is there any free trial for buy the dip indicator? I'm hesitating to get the VIP membership. Please help.
Upvote 0 Downvote

what comes with the vip membership
Upvote 0 Downvote
You must log in or register to reply here.